Producing and starring in an indie film 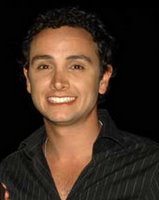 OFFING DAVID Executive Producer Richie Harkham admits, "Being a producer of a no-budget feature has been real tough at times. But on the whole I am bringing one of my life long dreams into fruition."

He joined OFFING DAVID as lead actor and was immediately impressed by the directing style of Jeff Bays. The two teamed up to save the film when it was about to fall apart.

"Jeff is an amazing director,” says Harkham. “He always strives for the most true and real in-the-moment performances which led me to doing some of my best performances to date."

In 2004, Harkham took a leap of faith and flew to New York to pursue his acting talents at William H. Macy's Atlantic Theater Company. There he acted with the likes of Lucy DeVito and Anna Chlumsky from My Girl (1991).

Later that year he landed the lead role in the small indie feature film OFFING DAVID in Sydney. That choice would prove to open up new avenues for him as a film producer. Now after two years of production, the film is almost ready to be sent to festivals.

But even with his new love for producing, Harkham says he will always primarly be an actor. He says being on stage or in front of a camera brings out the life in him. And, he takes his acting very seriously. This was evident during an audition for a film in which he was reading for the role of a homeless person.

"They told me I could never play a homeless person because I didn't have the right look," explains Harkham. After being turned down for the role he set out to prove them wrong by dressing up as a bum and hitting the streets of Newtown.

Richie Harkham is a graduate of the University of Sydney and currently runs a winery in Australia's Hunter Valley where he specialises in making liquors.
Posted by borgusfilm at 9:49 PM